Gateshead travel to St James Park to battle against their main title rivals Brackley Town this Saturday (3pm kick off).

The Heed remain top of the Vanarama National League North going into the weekend with three points separating them from Brackley, who have one game in hand in second place.

Mike Williamson’s side extended their unbeaten run to 10 games last Saturday with a goalless draw against Bradford (Park Avenue) – a draw which halted a four-game win streak.

That stalemate was the first goalless draw Gateshead have played out in the league this season, having only done so previously away to Marske United in the Emirates FA Cup.

By contrast, Brackley have played out five goalless draws in the league so far with only Curzon Ashton having done so on more occasions.

The Saints have scored the least goals (47) than anyone else in the play-off places, but have kept an impressive 22 clean sheets in 33 league games.

Lee Ndlovu has struck 14 times for Kevin Wilkin’s side in the National League North this season with Matt Lowe three goals behind him in the scoring charts.

Cedwyn Scott and Macaulay Langstaff are both tied on 22 league goals for the campaign, while Adam Campbell is one away from being the fourth Gateshead player to score double figures in the division.

“Every next game is the biggest game of the season,” Williamson said on Thursday.

“We want to test ourselves against the best teams which is a privilege.

“We’ve got our own styles of play and I think on the day it will be a real battle and it’s the team that wins the battle and imposes their style on the opposition that I think will get the joy.”

“We have had some difficult games since we began trying to chase down Gateshead and, so far, we have managed to stay in there,” Brackley manager Kevin Wilkin told the Banbury Guardian.

“It’s a massive week for us. It’s not me trying to talk this game down but we will both have massive matches to come after it as well.”

Elliot Forbes could be included in the match day squad after appearing on the bench against Bradford (Park Avenue) last weekend.

Alex Nicholson and Dan Ward face late fitness tests to determine whether they will be available for selection on Saturday.

Owen Bailey headed home seven minutes in for his first Heed goal before Paul Blackett doubled the lead with 20 minutes on the clock.

Supporters must arrive at St. James Park between 12pm – 3:15pm to guarantee entry, allowing time for Brackley’s COVID-19 screening procedures. Segregation is in place at Saturday’s game with away supporters to enter through turnstiles one to three and situated in the Enginus Stand & T&G Stand.

Limited car parking facilities are available for £5 and the correct change must be ready to hand to the car park attendant.

Refreshments and alcohol will be available for away supporters at the bottle bar at St James Park. 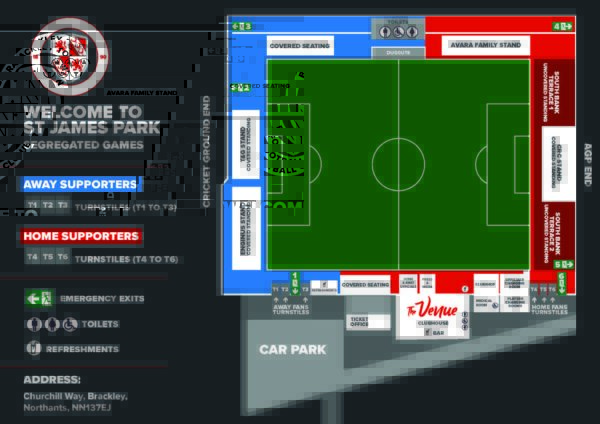 *Under-14’s must be accompanied by a full paying adult.

Tickets are available to order online or at Brackley’s ticket office on the day of the game, though purchasing in advance is recommended as queues are expected on Saturday.

A late penalty saw Gateshead defeated at Brackley Town as their 10-game unbeaten run came to an end.

Honours were even for much of a cagey affair at St James Park, only for Jimmy Armson’s spot kick to ensure three points went the way of The Saints.

Both sides struggled to get a foothold in the game early on with possession locked in a midfield battle, and chances would prove to be at a premium for the entirety of the first half.

Lee Ndlovu was moments away from pulling the trigger after he drove into the Gateshead box from left wing, but Robbie Tinkler halted his progress with an excellently timed sliding tackle.

Brackley’s trademark long throw-ins were a feature of the opening 45 and one caused a scramble inside the box, but black and white shirts threw themselves in front of any efforts before Filip Marschall collected.

Marschall was called upon again two minutes before the break to parry Shepherd Murombedzi’s effort wide, shortly after play had restarted following a medical situation in the crowd.

The Heed came out for the second 45 by controlling possession and pushing for an opener, but were met by a wall of red shirts with Brackley desperate to maintain their clean sheet.

Macaulay Langstaff was caught offside twice when trying to latch onto lofted balls from Louis Storey and Taylor Charters, before seeing a pass across the box intended for Cedwyn Scott cleared.

The decisive moment came with 10 minutes left on the clock, when Greg Olley’s backpass rolled under Storey’s studs and allowed Jaanai Gordon through before Marschall brought him down for a penalty.

Armson slotted high into the roof of the net from the spot to hand the hosts the edge with just under 10 minutes to go, forcing The Heed to search for an equaliser.

Langstaff struck the post with three minutes to go via the slightest of touches from Brackley ‘keeper Lewis, while at the other end Gordon curled wide of the far post.

Chances wouldn’t fall the visitors’ way however, with a 1-0 defeat leaving them top of the Vanarama National League North on goal difference.