The Heed come into the weekend in third place in the Vanarama National League North and sit five points behind Brackley Town with two games in hand.

Mike Williamson’s side would move within one point of second-placed AFC Fylde with a win and will also have two games in hand on The Coasters following Saturday’s fixture schedule with all but four teams in Buildbase FA Trophy action.

Gateshead are top of the league’s form table over the last 10 games with eight wins and two defeats, while Brackley lie third having won six from their last ten.

The Saints are the only team in the division to have conceded less than 10 goals so far this season with eight goals conceded in 16 league fixtures.

Six of those goals came in two games against AFC Fylde and Darlington while Leamington and York are the only two other teams to have scored against Brackley in league competition.

“Brackley are always a tough test regardless of where they are in the league,” said assistant manager, Ian Watson.

“They’ve had the same group for a few seasons which is definitely a strength for them, we’ve watched them back and we can see why they don’t concede a lot of goals.

“We don’t want to come away from our identity and we think we bring something different to other teams that they’ve played.”

“It was a good result on Saturday but now we are faced with the most in-form team in the league so it’s another tough game to follow,” Brackley manager Kevin Wilkin told the Northampton Chronicle.

“But we are feeling confident. We aren’t underestimating the size of the task ahead but we are confident.

“We have shown we can go to places like Gateshead and achieve results and that will be our intention on Saturday.

Greg Olley is unavailable for Saturday’s game due to suspension after picking up his fifth yellow card of the season at Farsley Celtic last weekend.

Owen Bailey’s first Gateshead goal and Paul Blackett’s fifth of the season put The Heed in a strong position after a fine performance at Gateshead International Stadium.

Mike Williamson made three changes to the side that won 4-3 at Farsley Celtic with Robbie Tinkler, Alex Nicholson and Adam Campbell coming into the starting 11 on a brisk afternoon at Gateshead International Stadium.

Blackett and Dan Ward both forced Brackley goalkeeper Danny Lewis into close-range stops in the opening six minutes, before Bailey broke the deadlock to give the hosts control.

Ward’s corner into the middle was met by an eager Bailey who rose above all red shirts in the box to head home his first senior goal.

The Saints looked to respond quickly, seeing half chances from Shep Murombedzi and Tre Mitford parried by Jacob Chapman before Blackett struck on the counter to make it two.

Bailey turned provider as he sent a ball through for Blackett in behind the visiting defence and the forward rounded Lewis coolly before slotting into an unguarded net to double the lead.

Chances were somewhat more sparse for the remainder of the half with Gateshead keeping Brackley at arms length at the other end, with James Armson’s wayward strike inside the box the only chance of note for the visitors.

Cedwyn Scott drove at his defender from the left wing and fired over the crossbar as he looked to join the scorers list, but The Heed went into the break in a position of control.

The visitors looked to get themselves on the ball more in the second half as they chased a two-goal deficit, but Gateshead were resolute at the back and conceded few chances.

The Heed threatened to add a third on the counter however, though Scott couldn’t get enough power behind his header from Ward’s cross to beat Lewis a few minutes after the restart.

Blackett’s pressure won the ball back inside the Brackley penalty area with 25 minutes left on the clock, but Lewis was there again to deny Scott as he got on the end of the resulting cross.

Brackley’s possession late on amounted to little in the way of notable chances and Gateshead ensured three points remained on Tyneside and moved within two points of top spot with two games in hand. 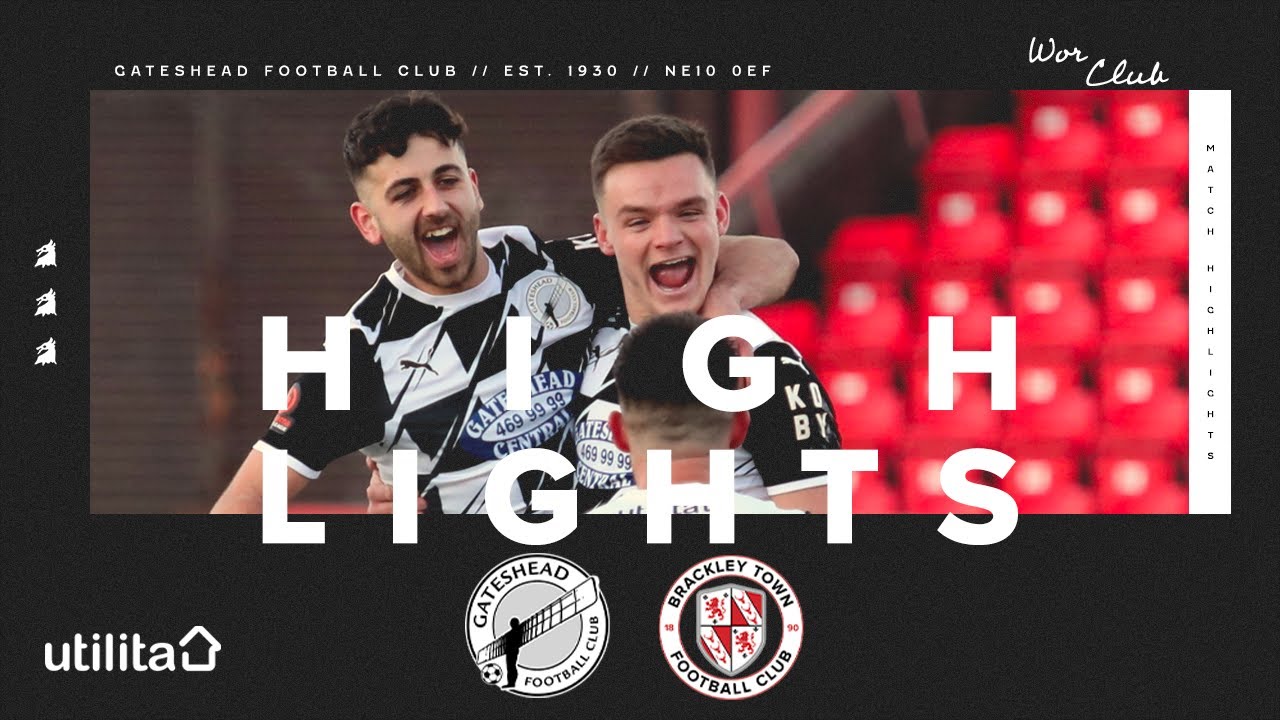