The Heed have been on the road for three straight league fixtures, winning at Kidderminster Harriers most recently while drawing to Southport and suffering a first defeat of the season against Leamington.

Fellow Vanarama National League North side Bradford (Park Avenue) currently sit 19th in the league table, but secured their sole win of the season on the road at neighbours Darlington.

Bradford were defeated 2-0 at home by league leaders AFC Fylde last weekend, and travel to the International Stadium on Saturday in their fourth away fixture of the season.

Avenue are searching for their first Emirates FA Cup win since the 2018/19 season, while Gateshead look to emulate recent runs to the first round of the competition where they faced Rochdale and Oldham.

“The FA Cup is massive for the club and we want to win just as much as we do in the league,” said assistant manager, Ian Watson.

“I’ve been part of sides previously who have just concentrated on the league and haven’t had a cup run, but mostly we want to breed a winning mentality and target a win in every game we play.

“This competition is huge in terms of finances, supporters love the cup runs and we want to be involved in a big draw somewhere down the line, but Bradford are a tough opponent who we’ll need to overcome first.

Elliot Forbes continues his road to full fitness and has returned to training this week.

Danny Greenfield, Jack Hunter, Luke Williams all remain out of contention for the coming weeks due to long-term injuries.

Tickets are available to purchase on the gate from 1:30pm or online, and are priced at:

We recommend supporters purchase their tickets online to minimise queuing and ensure quick entry into the International Stadium on Saturday.

A reminder that season tickets do not grant access to Emirates FA Cup fixtures and season ticket holders will need to purchase a single ticket for cup fixtures.

Gateshead earned progression to the Emirates FA Cup third round qualifying with a stunning six-goal victory over Bradford (Park Avenue).

Greg Olley’s 25-yard free kick opened the scoring on 20 minutes before controversy struck as Isaac Marriott’s equaliser was initially ruled offside before being awarded by the referee.

The Heed put the game to bed in the second 45 with five goals from Dan Ward, Macaulay Langstaff, Matty Jacob and a late own goal sealing Emirates FA Cup progression.

Mike Williamson made two changes to the side that won 3-2 away to Kidderminster Harriers last weekend with Cedwyn Scott and Matty Jacob replacing Paul Blackett and Williamson.

Gateshead controlled possession in the game’s early stages as they looked for another fast start on home turf, though their progress was disturbed by Louis Storey’s early injury and subsequent substitution.

Twenty minutes in and the opener came through Olley’s first of the season as the captain bent a 25-yard free kick out of Johnny Saltmer’s reach and into the far corner.

The home side were in the ascendancy from that point onwards and came close twice through Macaulay Langstaff, while Matty Jacob also tested Saltmer’s reflexes from close range.

The visitors found themselves level through their first attempt on goal with 39 minutes on the clock in controversial circumstances.

Marriott and Akeel Francis played a one-two after robbing the ball on the edge of the box before the former slotted home, with the assistant referee initially flagging for offside before he was overruled by the referee.

The Heed started the second half on the front foot in search of a second goal and Williamson almost turned provider when his cross was missed by a matter of inches in the box by Bailey.

Dan Ward forced Saltmer into a smart save low to his left as the pressure mounted, while the Bradford (Park Avenue) ‘keeper almost dropped his side in it when he spilled Matty Jacob’s header before gathering at the second attempt under duress.

It was Ward who then started off a mad goalscoring spree in the final half an hour, netting his first Gateshead goal with a fine 20-yard strike to regain control.

Langstaff beat Saltmer to the ball to prod home to add a third two minutes later and Jacob then grabbed his first two senior goals with two unstoppable headers from set-pieces.

Gateshead got a sixth in injury time when Adam Campbell’s low shot was diverted into his own net by an Avenue defender as the International Stadium crowd went into raptures, sealing progression despite Marriott’s late consolation for the visitors. 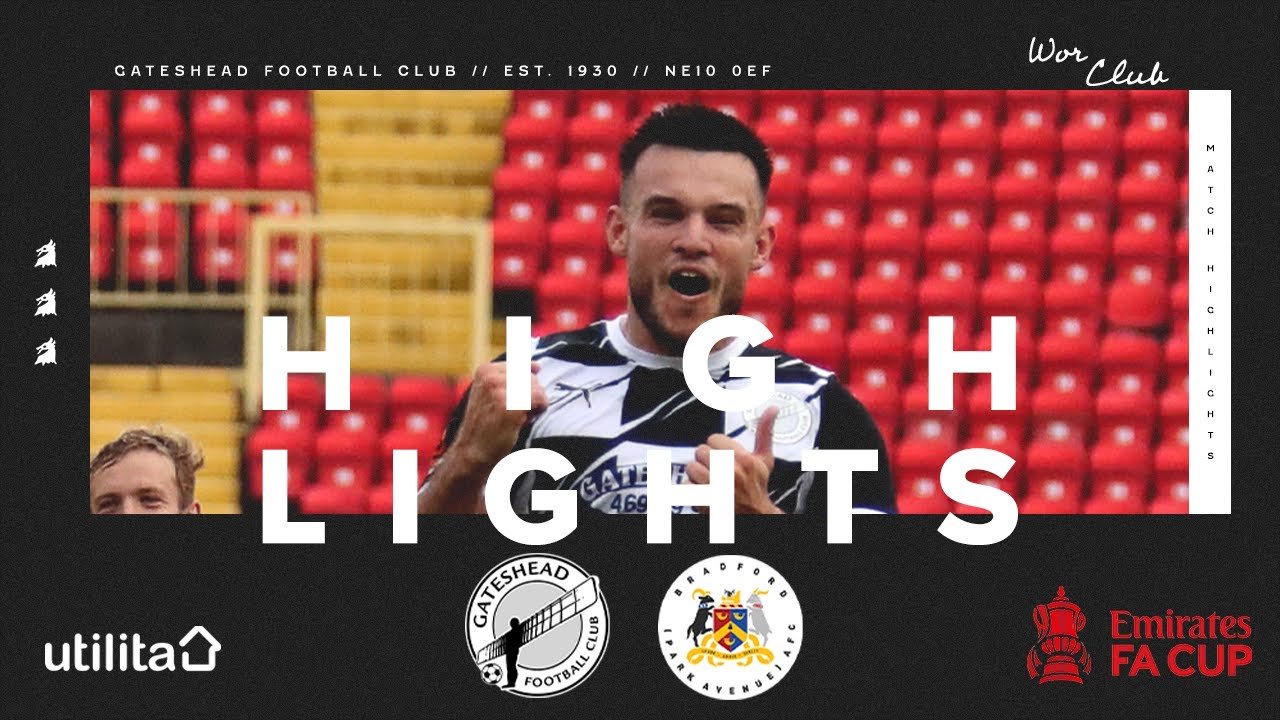