Gateshead host Maidstone United at Gateshead International Stadium on Saturday in their second Vanarama National League fixture of the week.

The Heed were defeated 3-1 away to Wrexham on Tuesday night having been forced to play an hour of the game with 10 men following Louis Storey’s sending off, and now sit 22nd in the league table after six games.

Gateshead are still searching for the first win of the season, having been previously denied by late equalisers against Dagenham & Redbridge and Notts County.

Mike Williamson’s side have been boosted by two new signings this week, with defender Jevon Mills joining on loan from EFL Championship side Hull City while forward Adi Yussuf signed on Friday.

Maidstone currently sit 10th having won three of their opening six following promotion from the National League South, and come into the weekend on the back of consecutive Bank Holiday wins over Torquay United and Aldershot Town.

The Stones’ 5-0 and 4-2 defeats to Wrexham and Dorking Wanderers respectively have contributed heavily to their 12 goals conceded, and Dorking are the only other side outside of the bottom four to have conceded double figures.

Recent results between the two sides have favoured The Heed, who are unbeaten in their last six fixtures against Maidstone having won four and drawn two.

“We’ve had to bring bodies in, we’ve had so many injuries that we haven’t been able to fill the bench the last few games,” said assistant manager, Ian Watson.

“I felt a bit sorry for the boys at times on Tuesday, they’d given absolutely everything but their legs had gone and we’re not able to bring someone on to replace them.

“It was unfair to the boys if we kept doing that, so the fact we’ve been able to bring two really good players in is a real positive.”

“I’ve been there many times before, I’ve won there, I’ve drawn there, I’ve lost there, but we have to do the right things,” Maidstone manager Hakan Hayrettin told Kent Online.

Louis Storey is set to carry out his one-game suspension on Saturday after his dismissal in midweek.

Jevon Mills could make his Gateshead debut, though Adi Yussuf will not be available until international clearance is approved.

Live commentary of Saturday’s match will be broadcast on YouTube by the Heed Army Podcast, starting from 2:45pm.

Tickets can be purchased online or on the gate at Gateshead International Stadium, with admission priced at:

Segregation will be in place, with Maidstone supporters seated in the East Stand. Away supporters can purchase tickets for a £1 reduction in the uncovered East Stand either on the gate or online here.

Tickets purchased online are not posted to supporters and must be either printed at home or shown via smartphone upon entry.

Turnstiles will open at 1:45pm on Saturday.

A dominant performance saw Gateshead earn their first win of the season against Maidstone United.

A Paul Blackett brace, a Greg Olley wonder-goal and an Adam Campbell long-range goal was enough for Gateshead to win despite a late Maidstone goal.

Blackett looked up for the match from the first whistle, five minutes in he was already causing Maidstone problems beating Joe Ellul with a superb run from out wide before sending a cross near post which Will Harris just couldn’t get to.

Six minutes later Blackett had already found the back of the net, Greg Olley with a world-class ball from his own half found Blackett on the run, who brought the ball down with ease beating Ellul before scoring with a dinked attempt.

Gateshead’s confidence continued to grow as the match went on, Owen Bailey took the ball from the centre of the pitch in the 22nd minute to just outside the box before unleashing a venomous shot forcing Yusif Mersin to make a save.

The 29th minute saw the Heed double their lead; George Fowler failed to clear the ball in his own box which allowed Paul Blackett to have an easy finish.

The start of the second half didn’t go to plan for Mike Williamson as Kenton Richardson had to come with an injury who was replaced by Lirak Hasani.

Roarie Deacon provided Maidstone with a good opportunity to reduce the deficit, when he produced a good bit of skill when he turned his marker before shooting wide from distance.

Blackett was close to getting his hattrick in the 69th minute, Robbie Tinkler played Adam Campbell down the wing who whipped a cross to Blackett but the striker just

Greg Olley put the Heed three up in the 73rd minute, the midfielder sending George Fowler the wrong way before he curled the ball into the far corner.

Gateshead increased their lead once again in the 76th minute, Adam Campbell found on the edge of the box before he poked it home to put the Heed four up.

Maidstone found themselves a goal from a Roarie Deacon corner, Joe Ellul beat everyone in the air to score from his headed attempt. 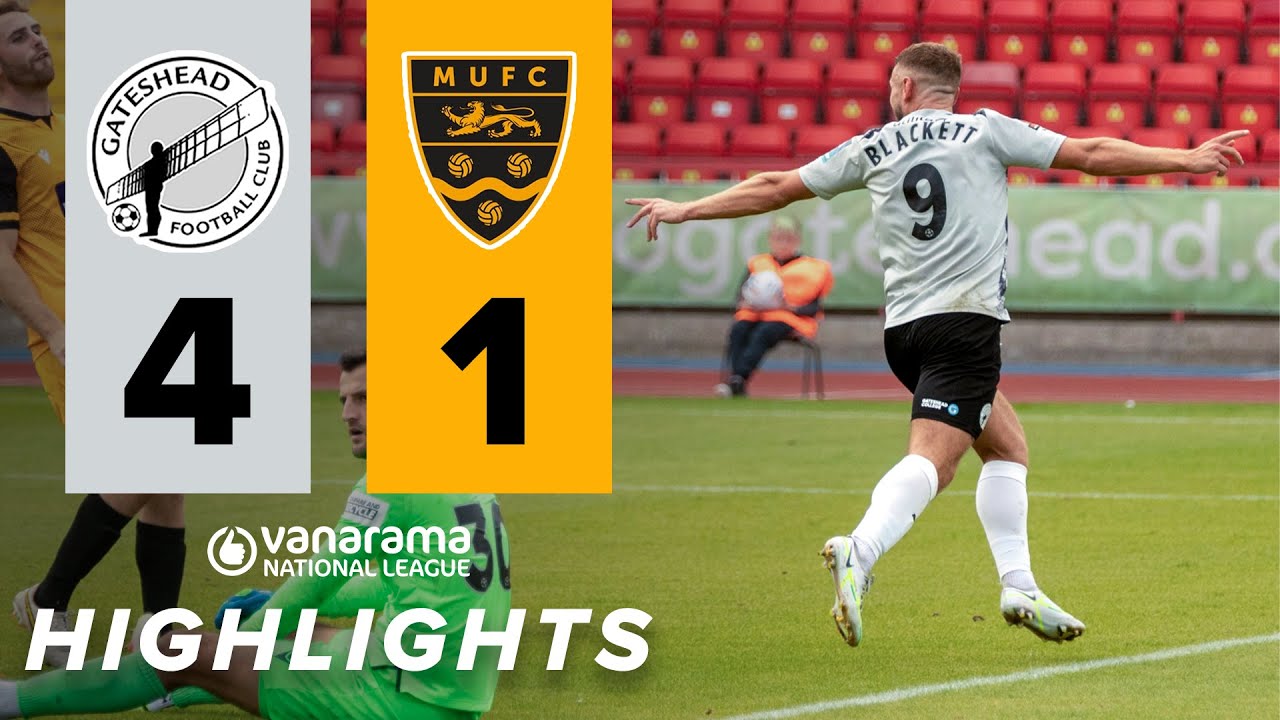