The Heed welcomed Barnet on Saturday and earned a 2-2 draw after being 2-0 down at half-time, with Paul Blackett starting the comeback five minutes after the restart before Adam Campbell scored the equaliser in the 74th minute.

Gateshead now sit 16th in the National League table after two draws from the opening two games, and no team in the division has won both of their season openers.

The Magpies currently occupy pole position in the league table, though they are level on points with eight other teams.

“We want to show everyone how good we are,” stated assistant manager Ian Watson.

“The character of the boys has been brilliant over the [previous] two games.”

“It’s a really big occasion for the club. Everyone’s buzzing for it.”

“We really believe that we are meant to be here, and we can be successful in this league.”

Aaron Martin will be unavailable after tweaking his hamstring in the first half against Barnet, whilst Ethan Pye will face a late fitness test ahead of the game.

The two teams haven’t met since November 6th, 2010, when Gateshead were drawn to play away at Meadow Lane in a FA Cup first round tie.

A first half penalty from Ben Davies gave the lead to the home side, before a second from Luke Rodgers saw the then-League One outfit through to the second round.

Tickets can be purchased online or on the gate at Gateshead International Stadium, with admission for home supporters priced at:

Away supporters can purchase tickets online here and will be situated in the uncovered East Stand, with tickets available at a £1 reduction as a result.

Tickets purchased online are not posted to supporters and must be either printed at home or shown on a smartphone upon entry.

Supporters must purchase tickets under the relevant age bracket, and there is also a carer option which permits entry free of charge.

Carers will be required to bring identification with them, such as a Blue Badge or letter proving their carer status.

Gateshead made it three points from three in the Vanarama National League with a 1-1 draw against Notts County.

Tom Allan’s first goal in Heed colours put the hosts on the verge of their first win, but an own goal from Aaron Nemane’s 88th minute cross ensured the spoils were shared.

Mike Williamson re-introduced Ethan Pye to the starting 11 after he missed the Barnet game through injury, while Allan was handed his first start on the right wing in Aaron Martin’s absence.

Gateshead’s trademark intensity and high pressing caught The Magpies off guard early on and could have led to an opener 12 minutes in, but Adam Campbell’s one-on-one was stopped by Sam Slocombe before Allan sent a rebound wide via a deflection.

Former Heed forward Macaulay Langstaff and Edward Francis drew straight-forward saves from James Montgomery in the opening stages, but clear cut chances remained at a premium in the first half.

A flurry of yellow cards for both sides proved the most lively action towards the halfway mark, though Montgomery was needed to keep out a Langstaff header from close range in added time.

Gateshead went ahead straight from the restart when Allan robbed Kyle Cameron of possession and slotted past Slocombe from the edge of the box, sending the 1,227 home fans into delirium.

Allan turned provider six minutes later when he burst down the right wing and crossed towards Blackett in the box, though the striker’s header went wide at the near post.

Langstaff did the same at the other end shortly afterwards as Notts gained control of possession, and substitute Kairo Mitchell sent another header over with 19 minutes to go.

Montgomery was in fine form both when commanding his area and keeping the visitors at bay for much of the evening, and he was on hand once more to keep Nemane’s near-post effort out with the clock ticking away.

Campbell sent a 25-yard shot wide of the mark for The Heed late on, but it was The Magpies who found an equaliser via a slice of good fortune in the 88th minute when Nemane’s cross was diverted in by the sliding Louis Storey.

That late strike saw Gateshead earn a third draw from their three opening league games at the end of a battling performance at Gateshead International Stadium. 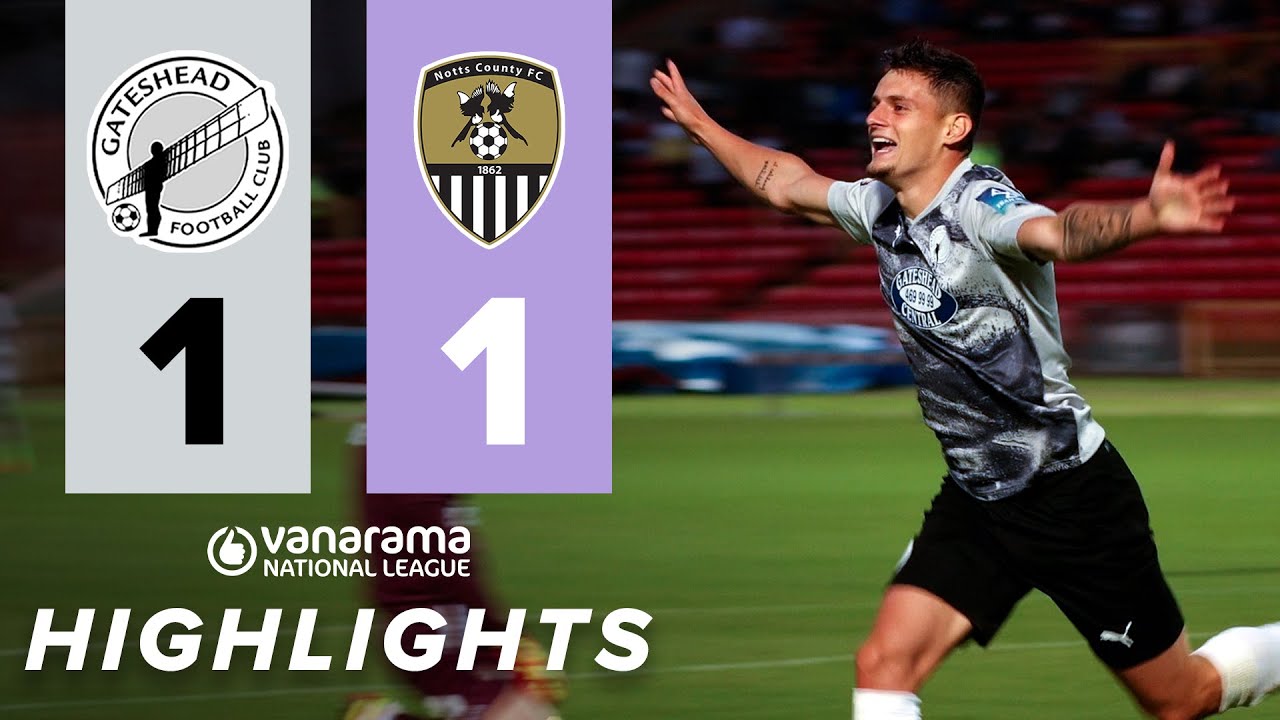