The Heed exited the Emirates FA Cup second round at the hands of League One side Charlton Athletic on home soil last Friday, with a crowd of 3,746 in attendance.

The last league fixture for Mike Williamson’s men was a 1-0 win away to Curzon Ashton two weeks ago, and other results since then now see Gateshead sitting sixth in the league table.

York City are in the midst of a period of managerial change with interim manager John Askey taking charge following the departure of Steve Watson.

The Minstermen have won twice and lost once from Askey’s three games at the helm with their most recent fixture a 1-0 win at Guiseley thanks to an 88th minute Kurt Willoughby strike.

Former Gateshead captain Scott Barrow could line up for York on Tuesday while ex-Heed midfielder Paddy McLaughlin combines a playing role with a position as the club’s sports scientist.

“We know what quality York have got – it’s going to be another massive test but one we’re looking forward to,” said Owen Bailey following Friday’s Emirates FA Cup defeat.

“I know a few of their lads who I haven’t seen in a while, so it’ll be good to face them.

“They’ve obviously changed their manager, but we’re just focusing on us to be honest.

“We know if we stick to our principles, we can give most teams a test like we gave Charlton.”

“Christmas will be a vital period for us,” Askey told York’s official Twitter following Saturday’s win at Guiseley.

“I saw [Gateshead’s] game on Friday and I thought they played really well, but we’re more than capable of getting a result against anybody in this league.”

Danny Greenfield remains unavailable due to injury on Tuesday night and is working towards a return to full training.

Segregation will be in place for Tuesday’s fixture with both home and away supporters situated in the Tyne & Wear Stand due to anticipated adverse weather.

Tickets are available to purchase online or on the gate for Tuesday’s fixture, and admission is priced at:

Gateshead won their sixth consecutive home fixture in the Vanarama National League North with a 2-0 win over York City.

Gateshead made three changes to the side that lost 2-0 against Charlton Athletic last Friday as Matty Jacob, Jack Hunter and Paul Blackett replaced Mike Williamson, Alex Nicholson and Macaulay Langstaff.

York started with an attack in the opening 60 seconds as Kurt Willoughby forced Jacob Chapman to block at his near post, but failed to register any meaningful attempts later as The Heed dominated the first half.

Blackett wondered how he hadn’t opened the scoring with 10 minutes on the clock, as he followed up Scott’s saved effort twice only to see both efforts cleared off the line by York shirts.

Greg Olley sent a free kick over the bar from the edge of the box midway through the half, before Blackett again had a golden chance to open the scoring with a free header from 10 yards out which he sent over the crossbar.

Seven minutes before the half-time break came the turning point, as Scott dazzled the York defence with quick feet before skipping past Adam Senior who swiftly brought him down inside the box.

The forward stepped up to take the penalty he’d won and made no mistake from 12 yards as he sent Pete Jameson the wrong way to put Gateshead in front.

The second 45 proved to be a closer affair with York offering more in attack, though Gateshead still had the better of the chances.

Olley and Willoughby both sent efforts wide of goal at either end, before Dan Ward and substitute Macaulay Langstaff both struck the side netting via deflections.

Substitute Williams and Akil Wright sent shots over the crossbar from 25 yards out with time ticking away, but Williams was still to have a say in the scoreline.

A flowing attack from black and white shirts saw Ryan Wombwell tee up Williams on the edge of the box and the forward curled into the top corner to net his first Gateshead goal and make sure of the result. 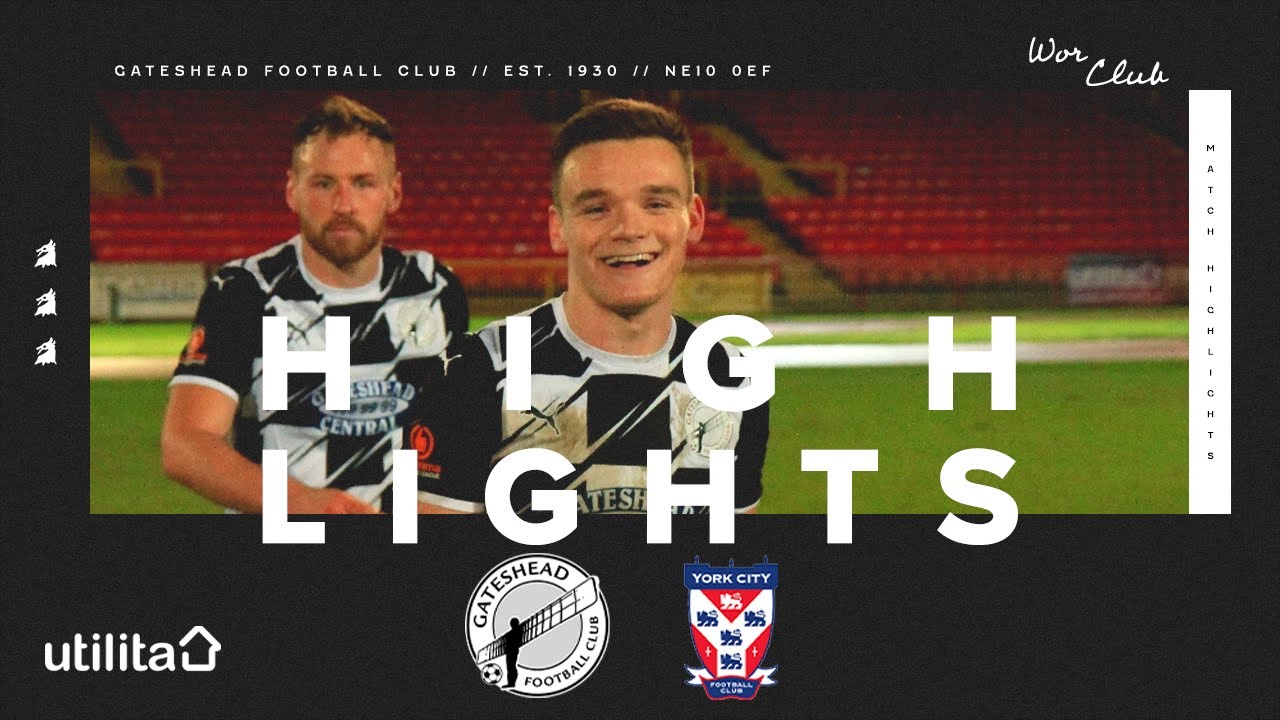