Gateshead travel to Aggborough to face Kidderminster Harriers in the third away trip inside seven days on Saturday. 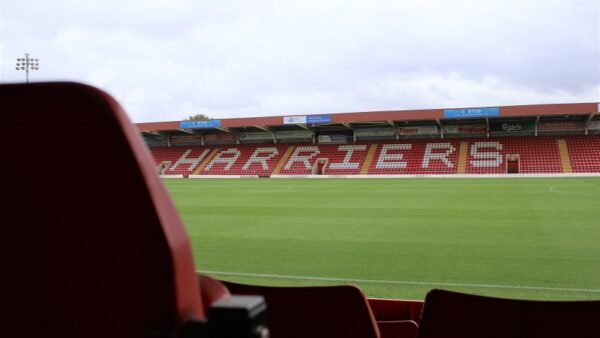 The Heed were handed their first defeat of the season at Leamington in midweek and currently sit sixth in the Vanarama National League North table.

Only league leaders AFC Fylde have scored more than Gateshead’s 10 goals so far this season, with Cedwyn Scott and Macaulay Langstaff both tied as club top scorers with four strikes each.

Kidderminster have enjoyed a successful start to the season and occupy third place, winning three and drawing two of their five games so far.

Managed by former Gateshead midfielder Russ Penn, The Harriers have conceded just three goals to date – the second fewest of all the sides in the division to have played five games.

“It’s a really good test for us and we’ll see where we are when we play them in terms of where we can improve and where we’re strong, because they’re expected to be up there and they’ve got off to a really good start.

“We expect to be challenging at the top end of the table as well so it’s a massive game for both clubs and all our boys are very much up for it.

“We’re looking forward to getting down there, playing with a real intensity and purpose and putting in a good performance against a strong Kidderminster side.”

“I know football is football and there is no rule to play but they like to play from the back and pass the ball, they’re very fluid and they rotate well.

“They’re a new, upcoming team led by a manager who’s got good principles, has played in the Premier League and has got good values, so we’ve got to be at it.”

Danny Greenfield, Jack Hunter and Luke Williams remain out of action while Elliot Forbes returned to training this week with his sights set on a return in the next few weeks.

A late decision will be made on Adam Campbell’s fitness after the forward started Tuesday’s game from the bench.

The sides last met at Aggborough in December 2019 with the points shared in a closely-contested encounter.

Ryan Johnson struck first to put Kidderminster ahead with 11 minutes on the clock but The Heed were level only seven minutes later when Greg Olley’s cross was slotted home by Jordan Preston.

Preston and Josh Kayode had chances to put Gateshead in front while Richard Peniket could have done the same for Kidderminster at the other end, but come the final whistle the teams couldn’t be separated.

Kidderminster Harriers recommend all supporters purchase their tickets online ahead of Saturday’s game.

Tickets will be sold from the ticket office on the day, but at a £2 price increase compared to an online ticket.

Tickets are priced at:

Click here to purchase tickets online ahead of Saturday’s game.

Gateshead secured their first away win of the season over previously unbeaten Kidderminster Harriers at Aggborough Stadium.

Macaulay Langstaff took his tally for the season to six with two first-half goals before Joe Foulkes netted on the stroke of half time to bring Kidderminster back into the game.

Paul Blackett and Ashley Hemmings struck early in the second half as momentum swung both ways but it was Gateshead who held firm to earn all three points.

Mike Williamson made two changes following Tuesday’s defeat at Leamington as Dan Ward and Adam Campbell both came back into the starting 11 in place of Cedwyn Scott and Matty Jacob.

The Heed got off to a dream start with only seven minutes on the clock as Robbie Tinkler picked out Langstaff with a fine lofted ball before the latter curled past Luke Simpson for his fifth of the season.

Kidderminster grew into the game from that point onwards and tested Gateshead’s resolve, with player-manager Mike Williamson called upon to block Morgan Amari-Smith’s effort inside the box 12 minutes in.

The home side’s pressure left them open on the counter and a careless pass let Langstaff in for his second midway through the half, slotting past Simpson after Olley played him in down the right hand side.

Harriers began to settle themselves on the ball in the latter portion of the half, forcing Gateshead to concede the majority of possession for the first time this season.

Two minutes before half time, the hosts struck to halve the deficit. A ball towards the back post made its way past claret and blue shirts to Foulkes, who nodded over Jacob Chapman to set up a second half with all to play for.

Just as they did in the first half, The Heed started the second with a goal inside seven minutes.

This time it was Blackett who found the net after darting in behind the defence before converting at the second attempt following Simpson’s initial save.

The two-goal lead was reduced to one once more eight minutes later however when Hemmings popped up at the back post to head home and hand Gateshead a difficult last half-an-hour.

The visitors had to dig in and hold their nerve in the game’s final stages with Kidderminster pushing up in search of an equaliser, but every effort was beaten away by a steely defence.

Langstaff sent a free kick just over the crossbar late on while at the other end Sterling headed wide as Williamson’s side held firm for all three points at Aggborough.